Sayings of the Elders regarding Spiritual Cleansing

In our community, argumentation and bickering are a common phenomenon. Usually, each side continues deeming (only) themselves to be on the right. On such occasions, leaving argument for the sake of Allah has been greatly appreciated in the Shari’ah..

“I guarantee a house in the center of Jannah for the person who leaves arguing, even if he is right” (Recorded in Sunan Abu Dawūd) 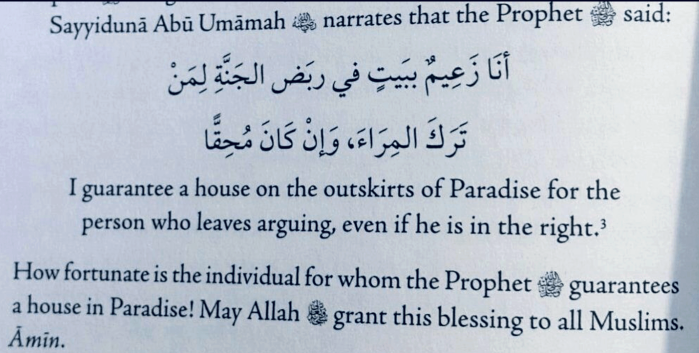 An excerpt from the book, “Easy Good Deeds”, by Mufti Muhammad Taqi Usmani

One of the most exemplary incident in this regard was when he was granted a sizable land in the midst of Karachi city for the construction of an Islamic seminary (Darul ‘Uloom). However, after the official approval by the government authorities and initial arrangements (which included a ceremony for the laying down of the foundation, construction of a few rooms and a telephone connection), some dispute arose over it. Despite being on the right and the project having started and progressing already, Mufti Muhammad Shafi withdrew himself and cancelled the project. Numerous people were struck with a huge shock and they insisted for continuation of the project. However, the honored Mufti remained undeterred and he clarified that avoiding disputes is more important than the construction of a seminary.

Later, Mufti Shafi was donated a large piece of land, by some traders, where the Darul ‘Uloom now stands (in a way which could have been much beyond the expectations at that time. Talhah)

– Adapted from a discourse at Jumu’ah by Shaikh Mufti Taqi Usmani.